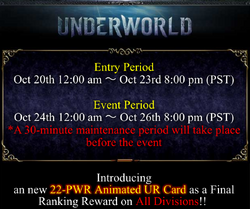 Underworld is a PVP battle based event first introduced as a beta event on September 17, 2014 at 12:00 AM (PST). Gameplay revolves around head-to-head battles between two players, with each player battling using three lines of five cards, for both attack and defense. Each respective line will battle against the other, with the player winning the most rounds winning the battle. Winning consecutive battles awards players reward bonuses.

Unlike regular battles, Attack power is not required to fight. Instead, Spirit Power (SP) is required. Each player is given a limited amount which regenerates over time. SP can also be recovered by using a Spirit Tonic.

For this event, players are grouped in three different divisions based on the overall power range of player lines, for both attack and defense: Haunt of Souls, Sanctuary of Demons, and Path of Champions.

Rankings are determined by the amount of Underworld Points (UW Pts) accrued by the end of the event, which are gained by winning battles and successfully defending against opposing attacks. Additionally, rewards are also handed out based on the amount of victories achieved in a player's respective division.

That is the base point values and are increased depending on the Chain Bonus the player is at.

It is a stairwell that, if you continue down its candlelit path, will lead you to the roar of bloodthirsty shouts. The very corridor will rumble with their crazed bellows

Reach the bottom and step through the massive gate, and you will find the arena where battles have raged since ancient times.

A place forever in the shadows, not once touched by the sun's light or the rule of man. a coliseum for true warriors overseen by avatars of war.

But be cautious, for if you set one foot inside, you will be assailed by men whose lust for violence knows no end.

Here, there are none but opponents.

Here, you will be watches carefully.

Will you be a worthy adversary?

Will you, warrior, face the blood-soaked challenge?

Or will you run?

If you wish to retain your noble spirit, it is best you turn back. For if you decide to engage in this fray, you do so knowing that, here, cunning and deceit are law.

Only slaughter awaits the one foolish enough to fight fair.

But, if you want glory, you should fight, for no small amount of it awaits the victor.

And once you have passed through, there is no turning back, for the decision is made.

What was once the path of mighty heroes...what is now the domain of the creatures of the night..the place where the dead themselves dwell...

Whichever you choose, you must fight until the fighting ends. As only he whose strength has carried him over this interminable struggle can know the true taste of glory's sweet liqueur

Retrieved from "https://legendofthecryptids.fandom.com/wiki/Underworld?oldid=265914"
Community content is available under CC-BY-SA unless otherwise noted.