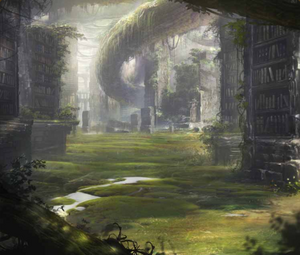 Sprawling out before Yvette and the Heroes' eyes, Scholastus, the City of Books, took their breath away.

It was shocking to think that, in that city, there lived but one, known as the Master Scribe. "Seems like a waste for one person to have this beautiful city all to themselves, huh?" The Heroes had come for Ida had informed them that here they might be able to learn more about Lorentz.

While the Heroes did not have fond memories of him, they were certain he would make an indispensable ally.

"H-hey Heroes, let's just do some good ol' reading, before we start the serious research, okay?" said Yvette, visibly excited. The Heroes could not help but smile at seeing the fairy so eager. They would never have guessed Yvette to be the scholarly type, judging from her behavior.

"Whatcha talkin' about!? A proper lady should be well-read, don't you agree?" The party have an obligatory apology. Dodging her retaliatory strike, they returned their gaze to the library-city's scale.

Suddenly, the Heroes remembered something. The last time they met Lorentz, he had been carrying a book with him. Perhaps, he too had been fond of reading, though the Heroes could not say for sure.

"Who knows? All we know for sure is that he's still alive," said Yvette, her tone dripping with disgust. The Heroes kept their opinions to themselves, but they shared the same hatred. Not only had he been their foe, he was incredibly pugnacious and took pleasure in ridiculing others. He was the type of person the Heroes hoped to avoid, and, if that weren't possible, keep their interactions with to a minimum. Still, currently they had no choice. They needed his help.

"Well, at least he's mot... impossible to talk to. Just don't let your guard down, okay Heroes?" All nodded in agreement; they would have to proceed with the utmost caution.

"Anyway, before we deal with all that.. Pleeeeaaase! There are so many great books here!" But it was just as Yvette was turning around to gauge the party's reaction that the Heroes heard a blood thirsty cry. One of the Heroes made a sudden dive, gripping Yvette and pulling her out of the way. The two had just barely dodged the sharp talons of a flying creature. Looking up, the party now saw a flock of dragons and giant birds, circling in the sky above them.

"W-what is that?! Didn't that stupid Ida say there weren't any dangerous Cryptids around here?"

It was curious that Ida would have made such an egregious error, in spite of being the World Soul.

Still, the Heroes prepared for the battle to come, while Yvette, feet planted firmly on the ground, glared up at the sky.

"It's like they're out of some fairy tale..." Intensely focused on the sight above, the Heroes lost any awareness of what else surrounded them, until they heard a cold, impartial voice. Startled, the Heroes turned around and saw a curious-looking woman. The woman gave off an undeniably strange aura, although the Heroes could not ascertain why.

"Hello, my name is Motty. I am the city's head librarian. It is a pleasure..." As she looked over the party, Motty smiled ever so gracefully. So she was the one in charge of managing the abundant intellectual resource of Scholastus. She was the Master Scribe. Of that much the Heroes were sure. However, whether she was friend or foe... "My sincerest apologies, dear visitors. But, as you can plainly see, my glorious city is currently under attack by monsters, freed from their, hmmm, literary bounds." "Books are not currently available for rent." "Freed from their... literary bounds? What do you mean? Could this be the work of Lorentz?" "Who?" Motty appeared to be deep in thought. She continued to repeat the name to herself...

"Hmm, i don't believe I know who that is," said the scribe, finally. "How could I, with such limited information. Plus, I've been so busy researching these creatures..." "Really, you would have thought Ida's premonitions would be slightly more...y'know, accurate." "Oh! You know Ida?" Motty's face had lit up at the mention of Ida's name, her aristocratic air vanishing at once. She now seemed rather childish.

"What about Ida?!'" Motty said, "She has returned. She was and is again a very important friend of mine. Wait. You must be the legendary Heroes! Oh, thank gods."

Yvette and the Heroes were completely clueless as to what the librarian was talking about. "Heroes, may I request you assist in the returning of these Cryptids to their proper... home?" "Oh, you want our help? We'd be happy to, if you can tell us what we need to do," answered Yvette. "Same as always..." she then muttered, clearly imagining what was to come.

"Yes, the monsters you see before you belong to two different stories. The first is a famous work I am sure you have heard of, the Tome of Mystaria. The second, a story of a star-crossed lovers, The Princess's Plight. Both of these works are somewhere within my city, but it has been impossible for me to retrieve them while being assailed by these fiends. I ask that you retrieve them in my stead."

"So, all you need is for us to get them for you?" "Yes, if you can bring them to me, my powers should be enough to return them from whence they came." "Should be, 'huh? Oh well, I guess we don't have much choice," said Yvette, clearly disappointed.

All were thinking the same thing. While they could not be sure, they could not suppress the feeling that Lorentz was at the root of the Cryptids' escape. Regardless, they had no choice but to retrieve the books. The Heroes prepared themselves for their next quest, setting out for inner part of Scholastus.

In the center of the City of Scholastus... Among the narrow aisles between the bookshelves, Motty removed a book and handed it to the Heroes. They held it delicately, as if it were made out of glass.

As the Heroes examined the book, they noticed it was exceedingly plain. Not even the cover bore its title.

"And you think that this will lead you to Lorentz?" said Motty, doubtfully.

"I would tell you if we knew," sighing slightly, Yvette replied.

The party had succeeded in their task of finding the two books and returning them to Motty. However, after the fictional characters had been returned, all noticed each book dropped a slip of paper. It was the Master Scribe who realized that the letters on the first slip combined with the numbers of the second formed the numerical identification of a book in her city, and the party set out to find it.

Finally, they arrived at its location. Even after having explored the city in full during their quest, Yvette couldn't help but to express her exasperation at its size. The Heroes were inclined to agree with her. Though at least they had obtained something which might help them find Lorentz. Theirs had not been a wasted effort.

"If it's true Lorentz is connected to that book, you might be correct in that he was the one behind this calamity," now commented Motty, her brow furled.

All attempted to avert their gaze from her as one of the Heroes carefully opened the book. As the pages were revealed, the Heroes and Yvette looked on in shock. They could not believe their eyes. Each silken page was completely and utterly blank.

Unable to contain her surprise, Yvette suddenly burst out laughing. "He sure got us," admitted the fairy, and the Heroes could not help but to laugh along as well.

"Well, the title of that book is The Tales Untitled, after all."

"What on Neotellus do you mean?" Yvette asked, still laughing.

"The book's story exists purely in the mind of the reader, you see? It allows the reader to enjoy whatever story they would like. That, I believe, was the author's intent," explained the Master Scribe.

Yvette blurted out, "Can you believe that!? What a waste of paper!!"

"Oh, no, not at all. It is far-and-away most famous work of this, ahem, anonymous author."

"But of course it is," reported the fairy.

The two ladies continued their debate while the Heroes turned back to the pages of the book. It stuck them that they had to have missed some clue, some hint, somewhere, but the endless white pages continued to confound them.

Still, if the book was truly unimportant, than what could explain the slips of paper in the Tome of Mystaria and The Princess's Plight?

"Perhaps you should write a tale of your own. Maybe that was what lorentz wanted you to do?"

"Yeah, I don't think so," returned Yvette, her tone darkening.

Then she turned her attention back to the book.

"Just how many pages long is it?"

The Heroes continued to go through each page, until finally they had reached the last of The Tales Untitled's 812 blank pages. It left them completely at a loss. The two mysterious hints had led them to a seemingly dead end.

Had someone set them on a fool's errand? Considereing this, a wave of exhaustion spread over the Heroes. There had to be something they were missing. The Heroes closed their eyes, trying to recount everything that had transpired to this point.

"I guess we have no choice. We're gonna have to tear it apart," said Yvette abruptly.

Motty's eyes set ablaze with anger. Stepping in front of the fairy to protect her from the charging librarian, the Heroes did their best to assuage Motty's fury.

Paying no heed to Motty's anger, Yvette turned her attention back to the nameless, textless tome.

"We can use the Dimensional blade that Ida gave us! We can use it to cut a path into the world within its pages..."

"That would be impossible. 'Blank' means 'blank'. The Tales Untitled has no world of which you speak. Even if you could enter, I am sure all you would find would be an expanse of nothingness."

"But even if they were blank originally, perhaps Lorentz's made his own world within them. I think that is more than possible. I could see it; it's just as the author intended."

Motty was clearly struggling to contain her bloodthirsty furor towards the indignant fairy. The Master Scribe's respect for literature was undeniable.

"Still... if he was able to create an alternate world within the book... it seems the trouble we face is even greater than I had imagined."

Feeling somewhat apologetic for what they were about to do to Motty's precious book, one of the Heroes drew the dimentional Blade from its scabbard. Motty turned away and Yvette lobbed The Tales Untitled into the air. Still suspended, one of the Heroes brought the blade down through the book's spine. With a loud tearing sound, a massive rift in space had appeared before the party.

But even as she screamed them, Yvette's words were hard to make out as they were sucked into the portal. Standing before it, the Heroes imagined the battle to come as they were bathed in the violet light. They were sure, if it were against Lorentz, it would be perilous indeed. The Heroes turned back to Motty to warn her that she was not to come after them by any means.

Yet they realized that wouldn't be necessary as they saw her occupied tearfully collecting the pages. With deep regret for the Master Scribe, they jumped through the portal.

On the other side of the portal, a forest loomed before the Heroes. In the muggy air, they heard the chirping bugs, the rustling leaves and...

They could sense the presence of their twice-defeated enemy, Lorentz.

"You are late, Heroes. I never thought you to be so deliberate."

Retrieved from "https://legendofthecryptids.fandom.com/wiki/Tome_of_Mystaria?oldid=243996"
Community content is available under CC-BY-SA unless otherwise noted.