To commemorate the 2nd anniversary of the Android version of Legend of the Cryptids, another power 19 card was entered in as a final ranking reward. 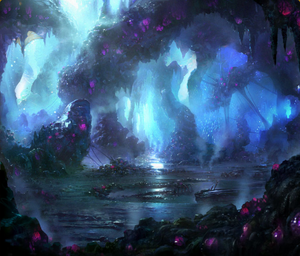 "Monsters and bandits have taken up residence in the nearby ruins and are disturbing the peace. Will you help us?"

Having accepted the quest, the Heroes dragged a grumbling Yvette towards the mountainous caverns where the ruins lay. Cicadas chirped in chorus along the tree-lined path. There was not a cloud to be seen in the sky, yet that allowed the sun to radiate its heat unabated. Yvette's tolerance gradually began to melt away in the scorching heat until...

Though the Heroes tried to treat the testy fairy as a lady, she had fewer scruples, having announced her intention of take off her outer layer of clothes to cool down. It was naturally met with unanimous protest. Additionally, it was Yvette who had jumped at the chance to explore the cavernous ruins, for the silly reasoning that "it might be cooler inside". The party had no problem with assisting those in need, yet they were beginning to feel like they had built a reputation as miracle workers. As they continued up the mountain trail, the path grew narrower as a forest formed around them. Not a single beast or ne'er-do-well had been seen since they left the city. The group was cautiously optimistic, hoping that the task would not be as rigorous as they were told.

"Hey, are you guys travelers?"

The Heroes had just sighted the cavern entrance when a rugged man in an elaborate outfit approached them. Alongside him was a burly bipedal beast with fearsome fangs.

"...It's rude to address people like that without introducing yourself."

Yvette's countenance revealed her wariness of the newcomer and his pet. The Heroes did not believe him to be a threat, yet they remained cautious. It was entirely possible he was one of those about which they had been warned.

The man tapped the beast on the nose, signaling it to lie down. Then, he doffed his unique hat and gave a slight nod.

"My name's Vitte. They call me an explorer, but I'm just your everyday drifter with a thing for ruins."

Judging from his intricately adorned garb and proper bearing, "drifter" seemed to be an ill-fitting descriptor. Indeed, he appeared to be more of a noble or other high-born breed.

Vitte did not look like an enemy, yet the Heroes looked to Yvette to decide if they should trust him or not. Her eyes, sharp as ever, seemed to pierce through Vitte. In their travels, the group had learned to trust Yvette's powers of observation; she was able to discern dangers that they could not.

"Someone this cool couldn't be a bad guy, right?"

There was a certain style to his outfit and his features were indeed handsome. Yvette's keen eyes had proved themselves once again in stunning fashion. Still skeptical, the Heroes relaxed their fighting stances.

After properly introducing themselves, the Heroes explained the circumstances to Vitte.

Vitte appeared concerned by this, which roused suspicion in the Heroes. Had they unwittingly revealed themselves to be at odds?

"You guys know about the fortress inside the ruins and who runs it, right?" he asked as he fidgeted with his hat.

When the group shook their heads in response, he gave a sigh of disappointment. The Heroes had been told it was a group of thieves and demons, yet it appeared the situation was not nearly as simple.

"I won't say they gave you the wrong idea, but they definitely didn't tell you the whole story. What you're going to find inside are nothing but Roamers."

"Just as it sounds like, those who have lost their way in this world. There's something about the ruins here that draws them in as natural as rainfall. While I'm not saying I pity them or anything, I wouldn't go deciding they're evil that easily. This could be trouble."

"When you're dealing with clear-cut villains, the answer's obvious. But how should true warriors of justice handle more sympathetic enemies?"

Though posed as a rhetorical question, the Heroes answered that they would try to do what they could to help. Though their answer did not solve the issue, they felt they had to give an honest reply.

As Vitte mulled over their response, Yvette decided she wanted to find out more about him.

"By the way, what are you doing here? Just checking out the ruins like you said?"

"Close, but not quite. I have something personal to take care of."

Before they could obtain any more details, Vitte's beast turned toward the cave and began to growl. It was clear that something was about to emerge from the darkness. The Heroes took Yvette and hid in the thick brush while Vitte and his companion did the same.

All held their breath as two humans and three monsters stepped into the sunlight. They were engaged in some sort of friendly banter, but they were too distant to be audible. The Heroes were slightly surprised by how well two races seemed to be interacting, given their supposed reputation. After a while, the five "Roamers" headed into the forest.

"Sentries, from the looks of it. I guess they have some kind of hierarchy."

Vitte stood up, wiping the dirt from his cloak taking out an elegantly embroidered handkerchief. He offered it to Yvette before turning to the Heroes.

"I need to help an undercover comrade evacuate from the ruins. What about you all? What are you going to do from here?"

The Heroes hesitated, but then said they would accompany him as one held out their hand. Vitte gave a hearty laugh and gripped the outstretched hand.

"Count me in, too. It's the least I can do since you let me borrow your handkerchief."

Vitte smiled broadly as he accepted it back. "Mighty kind of you to lend me a hand." As they moved closer to the cavern mouth, they could hear talking and shouting. Conflict was likely inevitable. Though they had hoped to learn more of the circumstances regarding their opposition before engaging in combat, they realized it would be highly improbable.

"All right, let's head in. I'll tell you my better war stories along the way."

Vitte stepped into the ruins without a hint of trepidation. The Heroes soon followed close behind, their ears turned to his tales.

Deep within the cavernous reaches lay an expanse of dazzling crystal, their azure reflections shining with heavenly light. Unlike the rest of the stagnant underground chambers, here the air was as crisp and refreshing as on a mountaintop.

"Stay alert; this area's guarded. And try not to hurt yourself on the crystals' sharp edges."

Heeding Vitte's warning, Yvette pulled back her outstretched arm. It was here where Vitte said his friend's final resting place was located. As the Heroes followed him to a far corner, they couldn't help but feel guilty for what happened with the Roamers. Vitte discussed the matter with their leader, and they agreed to move elsewhere. Though it was an unfortunate outcome, at least it prevented further harm to either side.

"This right here is why I can't let this place go."

Vitte stopped and sat down in front of a large crystal. Looking closely, the Heroes could make out an engraving. "Here lies the daring young explorer Radka."

"Yeah, she was my partner."

Vitte's current companion lay by his side, howling mournfully. It seemed to understand Vitte's grief and was trying to support him. Vitte appeared to be correct when he said beasts felt even stronger than humans about protecting their friends.

"I know that she's not here anymore. And even if she did have a soul, there's no way it'd stay in one place. This is all just for my own peace of mind."

Vitte turned his head up with a mirthful smile on his face, as if recalling fond memories of times past. After a moment of being submerged in thought, he surfaced with spirited words.

"When we first came to these ruins, we were caught square in a deadly trap. She might have been able to save herself, being quick as a whip, but I was about as nimble as a golem back then. If she hadn't have saved my hide, I'd probably be the one resting here right now."

As he wiped the dust from the headstone, Vitte continued.

"When Radka died, I made a promise to fulfill her dreams and become what she wanted to be. She was always so full of life, even as it was being drained from her. After she passed away, I took her body here and asked the guard to help me bury her."

"I definitely admired her, but as for whether or not I liked her as a woman, I think I've just about forgotten by now."

The Heroes were impressed by his honest answer. Had he not felt responsible to fulfill Radka's dreams, would he have become the great explorer he was now? Had her memory dictated his entire life?

"Truth is, I don't give a rat's behind about the Roamers. I just wanted to preserve my memories of her."

Even the more stolid of the Heroes felt passion in his words. Perhaps it was as Yvette had said, after all.

As they left the ruins, they could see the Roamers preparing to leave themselves. The Heroes asked Vitte how he had persuaded the Roamers to vacate the caverns, and found his straightforward response convincing.

"I paid them to. Just about everything I earned from my expeditions. Of course, now I have no more to my name than a pauper would."

"Seriously? So how much was it?"

Vitte clarified himself, saying he merely told them of his hidden cache. When he said how much it was worth, they all reeled in shock, despite the fact that none of them were normally interested in riches. It was a fortune that none could attain by normal means.

"As you mature, you come to find out that there's no force greater than gold. It's almost unfair, really," chortled Vitte.

The Heroes felt it was no laughing matter. Regardless of how indifferent he was to material worth, those treasures were still a result of his exploits. That he was willing to part with all of it showed how deeply he cared for Radka.

"Treasure, shmeasure. I still have plenty to show for everything: my knowledge, my experience, my abilities, and my guts.

His assured air of expression had a strangely attractive quality to it. If Radka were still alive to see it, it was possible she may have fallen in love with him.

"But that's enough hot air out of me. What about you all? Why did you decide to help the Roamers, not to mention me? I'd say you're the more admirable ones here."

This gave the Heroes pause. None of them could give a specific answer to his question. The most they could muster was that it was only natural to help those in need.

"I don't know about that. I daresay you guys are quite the special breed. Almost too special."

Though they sensed Vitte's words were somewhat belittling, they expressed their thanks regardless. This caused Vitte to erupt in raucous laughter, and the Heroes felt compelled to join in despite their confusion. By the time they stopped, they had reached the cavern mouth, where they said their farewells.

Night had fallen when the group emerged from the subterranean ruins. Though the daytime heat had subsided, the seasonal warmth caused sweat to run down their bodies after they had traveled a short distance. The party imagined they would remember their latest venture for years to come. As they then pondered where their future may lead them, they descended down the mountain trail.

Retrieved from "https://legendofthecryptids.fandom.com/wiki/Tomb_of_Oblivion?oldid=258761"
Community content is available under CC-BY-SA unless otherwise noted.