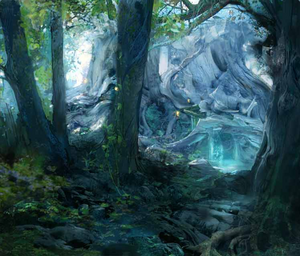 “Such an ill-mannered lot…”

As the vigilant Heroes drew their weapons, a smile curled the once minister of the Shadow King’s lips. Lorentz seemed quite different from how the heroes had remembered their previous enemy long ago.

When they had defeated him before, he looked to be almost an old man. Now he was anything but. Other than his white hair, he possessed an altogether youthful appearance. While he still gave off the same intimidating aura as before, the Heroes could sense Lorentz had an entirely different air about him.

“No need for that. I have no desire to fight you, yet.”

“Don’t let your guard down, Heroes…”

The Heroes surmised that Yvette was also aware of how the dark mage had changed. Was the one who stood before them really the same Lorentz they had fought before? Regardless, the Heroes did not feel like they could defeat him at the present.

“Oh dear, you Heroes do seem to be very cautious. But you must have so many questions! Is there nothing you wish to ask me?”

“Sure… there is one thing I’d like to know,” began Yvette, tentatively, as she surveyed the party’s current surroundings. “Where are we?”

The Heroes felt a certain amount of relief, for all knew the quick-witted Yvette could present more of a challenge for Lorentz than any of them could hope to, especially when facing such a cunning opponent.

“It’s a world I created to amuse myself, you see. It isn’t much, but I’ve tried to fill it with its fair share of what you might call ‘Gods’ and ‘Cryptids’… Well, you sure don’t see terribly amused.”

Hoping not to show any signs of weakness, the Heroes glared straight at Lorentz. They were already aware that he was not one to be trifled with, but still they could not comprehend the full extent of his power.

“Perhaps afterwards I can show you around my little forest, if you are interested. Unless you find the trees to be a bore.”

“Au contraire, I can’t think of any place more thrilling… Though before we get started, why don’t you explain how you’re still alive.”

“The Lorentz you see before you both is and is not. You can think of me as a puppet, so that you can grow and become stronger, Heroes.”

“What do you mean, ‘become stronger’?” Yvette inquired.

“In that you wished to defeat the Shadow King, your goal and mine were one and the same.”

It was almost as if he was trying to provoke them.

“Past enemies can never become friends. Have I misunderstood that everything you’ve said so far amounts to more than mere manipulation, Lorentz? Stop wasting our time.”

Lorentz truly seemed to tower above the Heroes. His presence intimidated them down to the depths of their souls.

But the Heroes also understood that they had no business being frightened. They were in dangerous land, and it was likely that they would have to fight their way if they were ever to return home. With Yvette unable to speak, one of the Heroes posed a few more questions to Lorentz. Why had he created The Circle? What more he was planning?

“…Me? Creator of The Circle? Why would you think something as preposterous as that?”

Lorentz appeared to be surprised by the Heroes’ accusation. It was not that the Heroes were certain. However, standing before him felt all too similar to standing before members of The Circle or the Black Sphere. If the Black Sphere had not been responsible for The Circle’s creation… the Heroes always believed that Lorentz must have been. They continued to ponder Lorentz’s confusing answer, but their thoughts were interrupted by sudden blood-curdling scream.

“Such bad timing,” muttered Lorentz, almost as if he were insulted for being interrupted.

“My apologies, Heroes, but you will have to excuse me.”

The Heroes were unsure of how to respond, but already Lorentz had vanished from where he once stood. The party surveyed the surrounding chaos, but Lorentz’s presence had completely dissipated.

“I have prepared quite the ordeal for you, Heroes… If you are truly capable of completing your quest, you should have no problem overcoming it and earning your freedom. Do not keep me waiting as you did last time.”

Lorentz voice echoed all around them, and Yvette screamed for him to come and face them. The stunned Heroes were totally unaware of what was to come.

One of the Heroes drew the blade and slashed through the air. Through they had the same tearing as before, no portal accompanied it. Still dazed and confused, the Heroes little understood what had transpired. Determined to find out, they set out to explore the strange forest before them.

Though the Heroes had entered a portal in Scholastus, when they returned to Neotellus, they found themselves at the site of unfamiliar ruins. Beneath a starry sky, crisp air once again filled their lungs, yet there was no time to enjoy the change of scenery. Before them was their nemesis, the one behind their previous ordeal, lounging on a pile of rubble.

"My little test seemed to give you a great deal of trouble, Heroes." Lorentz said, sneering.

"We took out Orodin, found the Golden Goddess, and returned the last of the Dimensional Blades to Elefarda. We're completely exhausted, all because of you, Lorentz!" Yvette shot into the air, raising her voice in protest.

Having released her fury, the fairy sluggishly floated back down. Clearly she was more than a little fatigued from the quest he had prepared for them.

The Heroes also felt the same exhaustion, but their adrenaline kept them continuously alert as the faced down their dangerous foe.

"It is as your surmised: I am the one responsible for its creation. Though, in truth, I hold very little sway over their actions..."

"Then why did you create it? Don't tell me that was just for fun, too."

"All I have done is to unify a group of people with a common goal: To pose resistance against the emerging threat that is the Shadowkind."

The Heroes had grown used to deciphering Lorentz's ambiguous words. Perhaps he meant that if "Black Sphere" was to corrupt all of Neotellus, that it was best to eliminate as many targets for its corruption as possible. Was that the origin of The Circle's ridiculous "salvation through death" philosophy? Still, whatever the case, the Heroes knew just how foolish it was to assume that Lorentz had charitable intentions.

"Before that thing can create an unstoppable army, I plan to strip it of its resources. It's a simple approach, but all the more reason why it will be effective. If I can hinder it, even slightly..."

So it was again clear that Lorentz was their enemy. However, one of the Heroes still thought it wise to put a hand over Yvette's mouth. There was no hope convincing Lorentz to abandon the path he had chosen. It would only expend extra energy on a futile argument. Turning back to Lorentz, the Heroes asked who was in control of the organization.

"To be honest, Heroes, I have no interest in the answer to your question. Though I suppose, if I had to answer it, I would say no one."

"What are you playing at?" Yvette interjected curtly.

"You see, The Circle truly is nothing more than a group of malefactors, spouting the same nonsense and moving towards the same end. They will rally on and on, for time eternal, until they've reached their goal. It amuses me that there are those in that group which do seek to create organization, but they are few in number. Really, I suppose The Cult may have been more appropriate in retrospect... the beliefs of The Circle do infect their target in that way: like an illness."

All struggled to remain calm. Defeating The Circle was one thing, but eradicating the influence of a genocidal cult was an entirely different matter. A leader was something the Heroes could overcome, but now... they could not imagine a more persistent foe.

"So why did you want to get rid of the Shadow King?"

"Rather late for that question, pertinent as it is."

At once the wind began to howl, and a most sinister of grins spread across Lorentz's face.

The Heroes braced themselves for what was to come.

"However, I beg your pardon not to answer it at the present. If I do, I will not be able to assist you again."

"Does this have something to do with your new look?"

"I have told you I cannot say. Or are you merely trying to get me to reveal my secrets?"

Still, it was as Yvette had said, it did seem that Lorentz had grown considerably stronger after the Heroes defeated the Shadow King.

In doing so, the Heroes must have eliminated some weakness that was previously restraining their current nemesis. Whatever it was, it only made sense that it had a deep connection with Lorentz's new abilities.

"All right then, fine. I can see asking you more about it won't do us any good. Maybe you can tell us how to defeat the Shadowkind or the Black Sphere."

"Had I known, this matter would be resolved."

"I guess so," replied Yvette, after which she muttered, "Why'd the heck did he come to see us, anyway?" Certainly, Lorentz left the party with many unanswered questions. However, in that they had been able to confirm that Lorentz was opposed to them, the Heroes did not think his visit was in vain. And...

If things went according to plan, they could take him out right here.

At Yvette's signal, the Heroes launched their surprise attack. Time seemed to slow as all advanced on Lorentz, malice visible deep within his eyes.

With a flash of light, the Heroes were pushed into the air by some intangible force. It took all of their skill to land on their feet. With the metallic taste of dirt on their lips, the Heroes lay stunned from Lorentz's counter attack.

"Everyone, are you all right?!"

Not responding to Yvette, the Heroes scowled at Lorentz. In the blink of an eye, he had brought forth the same terrifying giant they had defeated before, though now the monster looked almost demented... and beyond powerful.

"Don't be in such a rush, Heroes. I promise our time will come."

As the indomitable Lorentz was lifted up in the palm of the giant's hand, he looked down upon the Heroes.

"Save the best for last, don't you agree? For now, let us continue to make use of each other."

With those final words, Lorentz disappeared along with the monstrous giant, the Heroes standing at their ready until they could no longer sense even slightly his presence.

"Who's doing the using here, exactly?" Yvette asked, her voice dripping with disgust.

The Heroes understood Yvett'es sentiment, and yet, for now, their attention focused on something else.

Completely shocked, at last Yvette had realized. "Ugh! I hate him! That jerk!" The fairy shouted, her voice echoing across the ruins.

Retrieved from "https://legendofthecryptids.fandom.com/wiki/Through_the_Rift?oldid=288605"
Community content is available under CC-BY-SA unless otherwise noted.