For information on the card of the same name, see The Shadow King. 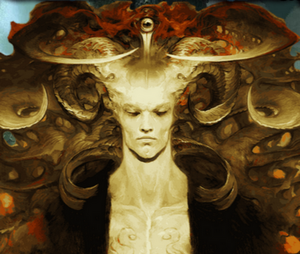 The Shadow King was one of the main villains of Legend of the Cryptids. He feasted on the spirits of the Cryptids to gain power, eventually becoming so powerful that the Cryptids could not defeat him alone. As he descended to Neotellus to destroy the people, the Cryptids banded together with the Heroes to help defeat him.

As one of the game's main villains, he appears frequently throughout the Heroes' adventures, and is often responsible for many of the disasters to befall Neotellus. After starting a war against all of the denizens of Neotellus and the gods themselves, he is eventually defeated by the Heroes using the Dimensional Blade. His demise however, leads to the birth of a new evil residing in a black sphere, the whereabouts of which are unknown, as well as indirectly leading to the formation of The Circle.

Though the exact nature of his powers are unknown, he possesses the ability to devour and absorb the life force of any creatures. He is known to possess considerable power and strength, being able to take on the most powerful cryptids and win, as well as being able to influence and corrupt some of the gods of Neotellus. He is also known to be able to bring the dead back to life, demonstrating this by bringing his four ministers back to life after they were killed by the Heroes. While the exact nature and origin of the Shadow King is unknown, he has been revealed by Ida, the World Soul, to be a member of the Shadowkind, beings of immense malevolent and corrupting power.

Though the Shadow King is immensely powerful, he often lets others do his bidding for him. He is aided by four ministers, who all possess considerable power themselves.

Retrieved from "https://legendofthecryptids.fandom.com/wiki/Shadow_King?oldid=241174"
Community content is available under CC-BY-SA unless otherwise noted.