As a part of 2 Year Anniversary Celebration Campaign, the Event requires no energy to participate in. Additionally, a total of 20 famous Cryptid cards from past events return as Bosses, with all of them available as rewards using a Returning UR Ticket. No guild rewards were included for this event. 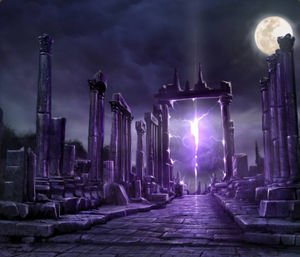 The news stuck the Heroes with the impact of a warhammer. Left dumbfounded, all they could do was laugh. "So what should we do?" Yvette asked them in half-smile.

The Heroes doubted they would be able to put up a resistance, much less prevail over, such an aggregation of Cryptids. Each Cryptid was known far and wide for their strength and prowess, but they had now been rapt by frenzy.

The entire predicament originated deep in a forest dwelling of fairies. Massive dragons, fearsome demons, and beautiful angels drove all the animals and spirits from the woods. None of the aggressors had any apparent connection, yet they simultaneously congregated at the same location and began their rampage. Though the Heroes had no understanding of the situation, there was no excusing ignoring the situation. They felt it was their responsibility to quell any sort of chaos.

"Well, there's no way they're the genuine articles. I bet they're doppelgangers or something."

If they weren't imposters, it would be much closer to their epic showdown with the Shadow King, a fierce struggle with the fate of the world in the balance, than a standard incident. "An impossible victory" would be no mere metaphor, but the cold truth. Facing so many mighty, ferocious Cryptids raging at once would require power to match. "But I still wonder how this could have happened." Yvette cocked her head to the side, quizzically.

She explained, "We first heard of a problem in the forest of Arboria a few days ago, about how someone brought something really dangerous into it." Waiting for the Heroes to focus their attention on her, she continued. "They were moving around these things called Dark Eggs. The eggs have the power to forcefully draw out the latent powers of whoever eats them at the cost of their sanity, turning them into full-blown savages."

Sighing, she ended with, "And to make matters worse, they're dirt cheap to get ahold of." A So-called criminal organization seemed to be behind the abundance of Dark Eggs in the forest. Demand was high among warriors for a relatively safe stimulant, and the racketeers used the forest as a place to hide their store before selling them on the market. However, that was until their entire hoard disappeared.

"That seems to be when this whole mess started." When the Heroes asked Yvette if there was a direct relation between the Dark Eggs' disappearance and the current situation, she simply shrugged in doubt. They had first believed that the riotous Cryptids may have hatched from the eggs, but that did not seem possible. Unlike normal eggs, they had no potential for bringing new life.

"It's not like you hear of gods or angels hatching out of eggs, y'know?" The Heroes agreed, and turned their thoughts to the twenty Cryptids. Ones they had previously engaged in heated combat. Ones they had fought with side-by-side. Yet now, every last one of them was an enemy. Though bewildered by their fate, the Heroes headed to battle.

"I guess sometimes molehills can turn into mountains, huh?"

Soon after the Heroes began quelling the rambunctions Cryptids, the monsters began to disappear. In their place were the Arboria pixies, infamous for their mischievous ways. As they possessed the power of shapeshifting, the incident appeared to have been solved at first...

However, it soon became obvious that they were incapable of imitating the power of the Cryptids the Heroes fought, much less their more complex characteristics. The cause had to have been much larger than the pixies.

"They can use transformative magic, but it's not really like they can turn into whatever they want. I guess it's more like they become something else."

With Yvette's explanation, the Heroes began to piece together the details. They concluded that the pixies had managed to find and eat the Dark Eggs hidden within the forest. That enhanced their powers, enabling them to more closely emitate stronger creatures.

"Sounds about right. Even cheeky pixies might jump at the chance to gain phenomenal power. They just used it to turn into something far more awe-inspiring." Yet the fact that the pixies seemed to have the memories of the original Cryptids still did not sit right with the Heroes. They asked Yvette if she knew anything that could explain that.

"When I said they literally. Fairies and pixies are a lot more sacred than you might think. We have all kinds of divine powers, and can even cause miracles when we put our minds to it."

In short, the pixies' power was great enough to even recreate the Cryptids' memories. Though the Heroes were reluctant to be the most plausible. As the incident was resolved and the cause identified, they all agreed that further investigation was not needed.

The weary party sat on the ground and gave a collective sigh. It was only natural they were exhausted from their constant battles against the mighty Cryptids. Even the more aggressive ones hoped they wouldn't have to pick up a blade for a while.

"You were all fantastic out there. They don't call you the Heroes for nothing." Yvette smiled as she looked around at the Heroes. Every last one felt they had become more powerful since the journey's onset. If nothing else, the previous trial had proved it.

One Hero casually raised a question to Yvette. If fairies are divine beings with special powers, did that mean she had them, too?

"Huh? Uhh... O-of course I do! Who do you think I am, anyway? I bet my powers could leave you all slack-jawed!"

That was the first the Heroes had heard of this. They had not seen anything of note from Yvette, so they naturally asked for a glimpse of her supposedly incredible powers.

"No way! It's not something I can show to just anyone! My powers are especially special and divinely divine. Got it?" Regaining her composure after her unexpected outburst, the agitated fairy changed the subject.

"B-but anyway, those were some pretty tough battles, huh?"

The Heroes frowned at her blatant evasiveness, yet before there was time to react, a scream of terror reached their ears. "Uh-oh, looks like there's still more trouble!" Sighing in relief, the fairy flew off in the direction of the scream, with the Heroes close behind.

The Arboria pixies had spread across the land, causing trouble as they pleased. By the time the Heroes captured them all and returned them to the forest, they were too tired to stand.

In order to recuperate from the trying series of battles, the party decided to rest for a rather long time before continuing their journey. 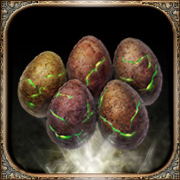 Obtain a UR from the past after completing Dreamscape 100 and All Treasures with a Returning UR Ticket.

Retrieved from "https://legendofthecryptids.fandom.com/wiki/Revenge_of_the_Ancients?oldid=288070"
Community content is available under CC-BY-SA unless otherwise noted.