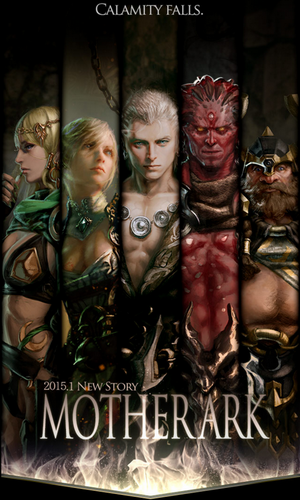 "The continent-sized starship known as the "Mother Ark" has descended upon Neotellus. Overcoming numerous trials, you board the craft to free the oppressed.

Yet you could not predict the tragic fate lying in store for your closest allies...

The floating landmass inside is called Elvarre." --In-Game Description

Mother Ark was a story arc, kicking off in early 2015 with Edge of Death and ending in mid 2015 with Harlequin of Chaos, which also kicked off the return of the The Circle arc.

It follows the events of the lone Hero, who was chosen by Silmaria out of the Heroes to accompany her onto the Mother Ark, as well as Yvette and other new characters introduced in the story.

The initial plot was a rebellion known as The Returners trying to free the oppressed lower class from the grip of Elvarren royalty. However, when Silmaria's true identity was revealed, it twisted into trying to stop her from destroying the Mother Ark in its entirety.

The main story concludes when Silmaria is defeated, and Elimval, at the request of Engset, accompanies the Hero back to Neotellus, while Engset herself, as well as Warren and Janesce, choose to stay on the Mother Ark, and Chalon takes some survivors to try and find a new home on Neotellus.

The story slightly continues in The Lost Army, where the Elvarren Adrashian wages war upon the Neotellans, and in Harlequin of Chaos, where a man named Righi, a member of the Circle, has stolen Elvarren technology. The conclusion of the latter event was the official conclusion of the Mother Ark story ark.

"A woman from the floating landmass who represents the Insurgence. Leads you aboard to overthrow the despotic rulers."

Silmaria, at first, seemed to be a normal woman who represented the Insurgence who came to Neotellus for help. However, it was revealed, as hinted at in The Floating Goliath, that Silmaria was actually a "Rapunzel," a shamaness (the other of which are clones) who was sacrificed to power the Mother Ark and keep it afloat, due to her immense power. She was freed from her tube and released on Neotellus by Chalon.

As a Rapunzel, she had a strong connection to composites, and could hear their voices, crying for help, even whilst in her tube. With this, and the fact that she knew about Elvarre's oppressive royalty, she despised the Mother Ark, and sought to destroy it.

She went through a great deal to hide the fact that she was really a Rapunzel, going as far as to free a Rapunzel and mutilate her beyond recognition, so no one would notice the similarities.

She had befriended the Hero, as well as other members of the Insurgence, and wanted the Hero to join her on her quest to destroy the Mother Ark. After the Hero refused, she fused herself with several composites, which all became Igduss, a giant composite fueled by Silmaria's hatred. She then swallowed Almvist and Grace, killing them both, and then Yvette.

In the end, she is confronted by the Hero. They try to stop her, but she still insists that they join her in the Mother Ark's destruction. She is then stabbed by the Hero in the chest, just as she returns an alive, but very ill and unconscious, Yvette, thinking about her friendship with the Hero, and dying happily as she knows she has died next to those close to her.

"A dauntless young man of the Elvarre ruling class. However, questions their system of controlling the Mother Ark."

Chalon is a man of Elvarren royalty, and brother to Engset. He, along with Engset, oppose the ways of the empire. Chalon in particular, however, opposes the use of Rapunzels to power the floating continent. As such, he is the one who freed Silmaria.

In Vengeance Rises, he is shown in the epilogue, almost fighting the Hero, yet revealing that he is on their side. In Royal Endgame, he stays behind to fight Warren, so that the Hero and Elimval can push on to save Silmaria.

Elimval feared the worst from his battle with Warren, but Chalon is revealed to be alive when he reappears in The Evil Within, where, in the end, he, along with Traugott and Janesce, lead several Elvarrens on to make a new life in Neotellus and negotiate with the Neotellan leaders, while his sister and Warren stay behind.

He also has brief appearances and is mentioned in a few other Mother Ark events.

Elimval says that he is like a brother to her.

"A kindhearted dwarf of the Insurgence. Possesses extraordinary might, yet his timid nature hinders his potential."

Gallegos is a cowardly dwarf, who mainly serves as comic relief in the first few Mother Ark events, until The Forgotten Labyrinth, where he overcomes his fears.

He does not return until the end, where he helps fight Igduss. His fate currently unknown.

"Fiercely patriotic marshal of the Elvarran forces who strikes fear into his foes with his master swordplay."

Warren is a marshal for the Elvarren empire. He clashed with the Hero several times, until finally teaming up with the Hero and the Insurgence in The Evil Within to save the Mother Ark from Igduss.

In the end, he stays on the Mother Ark while several others retreat to Neotellus.

It is hinted that he had romantic feelings for Grace.

"Rash leader of the Insurgence; holds a deep-seated hatred for Elvarran royalty. Has sworn to succeed at whatever cost."

As his in-game description says, he was the leader of the Insurgence, a rebellious group looking to fight the oppressive rule of the Elvarren empire. His hatred for the empire goes so far, that he cannot bring himself to trust Elimval, Engset, or Chalon, despite them being allies to the Insurgence.

In the end, he helps fight Igduss to save the Mother Ark, humorously bickering with Janesce along the way. He leaves with Chalon and Janesce to negotiate with Neotellan leaders over a new home for the Elvarrens.

"Cousin of the Elvarran Empress and reigns over the metropolis of Roshbahn. Exhibits superlative diplomatic aptitude. Elder Sister of Chalon."

First appearing in Cosmic Exodus, Duchess Engset is the cousin of Grace, sister of Chalon, and heir to the Elvarren throne. She was a tactition, setting out missions for the Insurgence against the empire.

Though usually calm, she was shown to get very angry, especially after Silmaria was abducted during a mission.

In the end, she also helps save the Mother Ark. She decides to stay behind, due to her having to take the throne in Grace's stead, but sends Elimval to Neotellus to aid the Hero, giving her a communication device to continue talking to her.

She has been with Elimval since childhood, and is a close friend as a result. Elimval may have romantic feelings for her, but Engset seemingly only sees her as a sister, which would also be just fine, as Elimval's affections may just be sisterly.

"Engset's bright and cheerful attendant. Stubborn at times, but will show astounding initiative when necessary."

Engset's servant and a close ally of the Hero. She first appears in Unspoken Evil, and usually attends the Hero on missions ever since.

When Yvette is swallowed by Igduss, Elimval becomes the guide character of the game.

In the end, she is sent to attend the Hero on Neotellus by Engset, continuing her role as the game's guide character.

It is hinted that she has romantic feelings for Engset, with the way she holds Engset in very high regard, even going as far to say she "loves" Engset in The Forgotten Labyrinth. This could also be sisterly love, however, seeing as she sees Engset's brother as her own brother.

"Haughty empress of Elvarre. Views the entirety of the Mother Ark as her plaything, ruling with absolute authority"

Grace was the Empress of the Elvarren empire, whose oppressive rule was more than likely due to her spoiled upbringing. However, she died in Royal Endgame when she was swallowed by Igduss.

It is possible that Warren had feelings for her, but with as cold as she was, she probably did not return these affections.

"An Elvarre general with an honorable nature. Struggles with the merciless anti-Insurgence role commanded of her"

Janesce is an Elvarren general who first appeared in Edge of Death, where she clashed with the Hero. She was not seen again until she allied with the Insurgence and the Hero in The Evil Within.

She helped save the Mother Ark, then, along with Chalon and Traugott, moved to Neotellus and tried to negotiate with Neotellan leaders over land for the Elvarrens to migrate to.

"Imperial researcher of composites. Ill-tempered and cruel, he has sacrificed many in the sole pursuit of knowledge."

Almvist first appeared in Unspoken Evil, where he had one of his composites swallow Silmaria, saying he was "Taking back what was ours," hinting at her true identity as a Rapunzel.

He last appeared in Royal Endgame, where he was swallowed and killed by Igduss.

Read the "lore" section of these cards, as well as the stories of the events they were rewards in, to know their place in the story.

The last episodes links to the the new storyline featuring The Circle.

Retrieved from "https://legendofthecryptids.fandom.com/wiki/Mother_Ark?oldid=280308"
Community content is available under CC-BY-SA unless otherwise noted.