Legend of the Cryptids Wiki
Register
Don't have an account?
Sign In
in: Raid Events, Infinite Realms 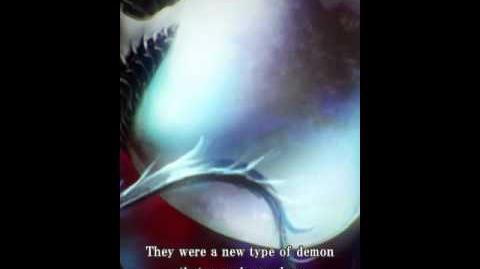 
This raid event introduced a new "Assistant System", whereby players may request assistance form a "Summoner" and an "Assistant Character". These Summoners and Assistant Characters can provide additional damage against a raid boss, provided they are summoned at the beginning of a battle. Depending on the character summoned, a "Recovery Boost" may be given. The Assistant System was not introduced until the appearance of the hidden boss.

"I see... What amazing power. To think that you were able to overcome him..."

Even as Testament kneeled on the ground, utterly crushed by the Heroes, the defiant smirk on the black-clad sorcerer's face would not fade.

"Whaddaya mean 'I see'?! If you value your life, tell us how to cure the sickness right now!"

Yvette shouted at the sorcerer, her voice quaking with rage.

After defeating Maddox, the Heroes had roamed the outskirts of the mountain village, slaying countless demons until they finally discovered what they thought was the source of the disaster: the white fiend Sentsels. A single glance at her pallid figure would transform anyone into a demon. To avoid this curse, the Heroes had adopted the unusual strategy of shutting their eyes and allowing Yvette to lead them. They had somehow managed to defeat Sentsels, but they soon realized that the plague was still spreading. The demonized denizens of the village continued their relentless assault on the Heroes.

This could only mean there was someone else pulling the strings behind the scenes. And the one who had come before the Heroes as they frantically searched for a way to cure Yvette was none other than the man who lay prostrate before them, that grin of his as persistent as ever. He claimed to be the mastermind behind it all. After a fierce struggle, the Heroes had finally managed to subdue him. However...

"Sorry to disappoint you, but this malady is neither curse nor incantation. It's simply a disease. And once you're infected, you cannot be cured."

If Testament's words were true, then there was no hope.

To Yvette, it sounded like a death sentence. She floated there in a daze before spiraling to the ground, as if unable to resist gravity any longer.

The Heroes rushed to her side, but there was nothing they could do. They had no idea what to say.

They had managed to defeat the white fiend without turning into demons themselves, all thanks to Yvette's support. Survivor's guilt robbed them of all words.

Yvette clutched her chest in pain. It seemed the transformation was beginning. Without thinking, one of the Heroes reached out to comfort her.

"But that disease should only affect humans... I've never heard of a fairy turning into a demon."

Testament's amused voice made the Hero's hand stop in midair. That's when the Heroes realized that they had seen plenty of humans turn into demons, but no beasts. The Heroes looked at Yvette. Her appearance hadn't changed at all. But her shoulders suddenly began to quiver. Most likely due to her embarrassment.

The Heroes averted their eyes. They still did not know what to say.

Yvette's voice sounded full of shame. After heaving huge sighs of relief, the Heroes directed a sharp glare in Testament's direction. They were glad that Yvette was going to be okay, but that didn't mean they could forgive the one who started it all. They summoned their Cryptids and began to advance toward their adversary. That's when it happened.

"I am well aware of your power... and the fact that I cannot prevail."

They noticed something peculiar. No, perhaps it would be more accurate to say they hadn't noticed. Without warning and without a sound, Testament had disappeared. The Heroes gasped. They had barely looked away or let down their guard -- even blinked for that matter. And yet they had not noticed him vanish. It was as if he had frozen time and warped away.

The anger in Yvette's voice had transformed into shock. The same thought occurred to both the Heroes and Yvette at the same moment.

The name Yvette spoke belonged to a foe long since defeated. The Heroes instantly snapped to their senses and attempted to sense Testament's presence.

"How utterly vexing... How many decades must I wait before I can destroy you...?"

The voice was coming out of thin air. They could feel Testament's presence, though his body was nowhere to be seen.

If he had escaped to another dimension, then there was nothing they could do. Unlike before, they no longer possessed the blade that could split space-time and open doors to other dimensions.

"Are you working with Lorentz?! Did you lead us here to get revenge for him?!"

"I will not deny that I released that white demon to sow discord and lure you here... But do not be mistaken. I have no desire to enact revenge on Lorentz's behalf. No... I wished to surpass him..." After murmuring this, Testament's aura completely vanished. His final words had seemed somewhat...sad.

By the time they assisted the knights in slay' the remaining demons, night had already fallen. Having lost its leader, the mountain village found itself drowning in a desolate stillness.

The Heroes did not answer. They were gazing at the moon shining up above. It was beautiful as always, as if unaware of carnage that had unfolded below. Their quivering hands closed into tight fist. They felt as if an insurmountable fate awaited them. And they were afraid.

Community content is available under CC-BY-SA unless otherwise noted.