For the information on the first event in the series, see Heroes Colosseo I. 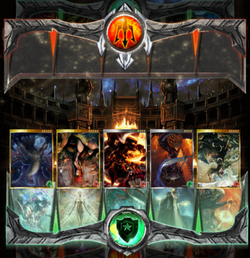 Heroes Colosseo is a battle based event first introduced to iOS servers on June 18, 2013 at 12:00 AM (PST). Gameplay revolves around turn based one-on-one battles between two players, with each player taking turns attacking and defending. The goal of each attack is to eventually completely drain the opposing player of their Life Points (LP) first.

Unlike regular battles, Attack Power is not required to initiate a fight. Rather, Battle Points (BP) are instead required, with each battle using up one point. Additionally, participation in this event requires creating separate decks, one main deck consisting of a five card attack line and defense line, and a support deck consisting of three five card elemental defense lines. Cards placed in these decks are automatically locked. Additionally, a back line is not present for battles. Skill effects are still present in battles, though their mechanics differ slightly.

Battles take place through a series of event specific decks chosen by the either the game or the player. A maximum of 25 cards may be selected: ten cards from the Main Deck, and five cards for each of the three elemental defense lines of the Support Deck.

Unlike regular battles, there is no back line support, with cards in the Main and Support Decks being the only ones allowed to participate in battle. Furthermore, cards placed in one line cannot be placed in any other line, regardless of deck type.

The Main Deck consists of both an Attack Line and a Defense Line, with each line carrying up to five cards. The Attack Line composes a player's offense in battle, with the amount of attack the line possesses determining how much damage is done to the opposing player's life points bar with each attack.

The Defense Line makes up a player's defense in battle, with the amount of defense the line possesses determining how much damage is absorbed from the opposing player's Attack Line. Additionally, around 30% of your Attack Line's defense is added to your defense.

Like regular battles, both lines are still constrained by power requirements.

The Support Deck acts as a secondary defensive deck for players, subbing in battles in place of the Defense Line of the Main Deck depending on the element of opposing players. The deck consists of three Defense Lines, one of each element type, with each holding up to five cards.

Each elemental line will sub in place of the Main Deck's Defense Line in order to defend against players of the opposite element. For example, when facing against an attacking water player, the forest line from the Support Deck will automatically sub into battle in order to defend.

Cards do not have to be of the same element as a particular line in order to be used in it. However, cards matching the element of their line will receive a boost to defense.

It is important to note that cards in the Support Line cannot participate in battle when attacking.

The player that has their Life Points completely drained first automatically loses the battle. Each attack made in battle drains Life Points, with the exact amount dependent on Attack Line damage and Defense Line defense. The maximum amount of Life Points a player has depends on player level, Energy, Attack Power, and Defense Power.

The Life Point formula is:

Note that the formula remains the same even if you have higher defense or higher energy perimeter points. And because the ratio is always atk/def, a higher defense gives you a ratio of less than 1.0 which results in an 11x multiplier.

Battle Points take the place of Attack Power used in regular battles, with each attack using up one Battle Point. All users have a maximum of six Battle Points. This limit cannot be increased. Battle Points recover and replenish at a rate of one BP every twenty minutes.

Battle Points can be replenished using Battle Elixirs, with the amount replenished depending the type of elixir. Elixirs can be obtained as rewards from this event, or can be bought from the in-game store.

Skill activation works similar to regular battles. However, since both the Attack Line and Defense Line is present, both lines have the potential to activate skills during a battle. As well, more than three skills may activate on any given line at the same time in battle (up to five).

Guild members cannot directly participate with each other in battle. However, members can still offer support to one another in the form of a 5% bonus to a player's maximum Life Points. This is achieved by simply selecting the option in the event main menu. When a player has given support to another guild member, both will receive a 5% bonus. If the target guild member has already been supported, only the supporting player will receive the bonus. A maximum bonus of 10% can be achieved by being supported by another member, and supporting a different guild member at around the same time.

When attacked and defeated by another player, the option is provided to attack that player back. This functions the same as regular Heroes Colosseo battles, although additional rewards are given for winning Revenge battles.

There are six possible classes that a player can be in at one time: S, A, B, C, D, and E. All users automatically start at class E if they have not participated before, and can advance up to class C by accruing a specific amount of battle victories. Beginning with Heroes Colosseo XIII, a Class SS was introduced, with additional ranking and class maintained rewards added.

In order to advance to the next three classes, players must either achieve enough victories in order to participate in special Ladder Battles held on the last day of a Heroes Colosseo event, or achieve a certain amount of victories to take vacant spots in higher classes. Class changes take effect only for the next Colosseo event.

The following are match pairings used for the ladder battles.

The top three classes each have a limit on the number players allowed in the class. Players who fall outside of these limits at the end of each event will be demoted to a lower class.

The following are the maximum number of players allowed in the top three classes.

Starting with Heroes Colosseo XIV, class rewards and effects were transferred into a new "Title" system. Being in certain classes affords players one of several different titles, with each one giving players certain on-going benefits and effects. Similar to the previous reward system, moving up to new classes for the first time still affords players special one time rewards.

Additionally, players are now given parameter points, with the exact amount based on the class a player is in. These parameters points may be invested into any stat the player wishes, although they will automatically be removed once the next Heroes Colosseo event takes place. Maintaining a title or moving into a new title will allow players to receive their bonus parameter points back again.

The following are the titles available, as well as their requirements and the rewards for achieving them.

The following are the class up rewards and parameter point bonuses afforded for each class.

A variety of rewards are handed out for completing certain goals, such as accruing a certain amount of victories and battle attempts, defending against attack successfully, and taking Revenge on another player. Special items are also handed out for achieving certain classes in the event. In addition, special perks are also handed out to players as a reward for maintaining their class after the event ends, particularly if they are in a high class. These perks consist of ongoing passive effects, such as special bonuses in other events.

Beginning with Heroes Colosseo II, rewards were also given out for achieving a certain final ranking, based off Colosseo points earned during the event.

Retrieved from "https://legendofthecryptids.fandom.com/wiki/Heroes_Colosseo?oldid=250607"
Community content is available under CC-BY-SA unless otherwise noted.