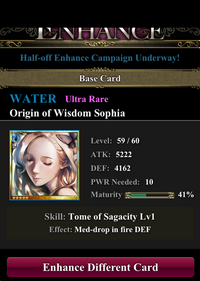 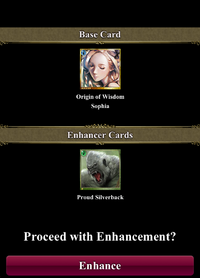 Enhancing is the act of increasing a card's experience through the sacrifice of another card. As cards gain experience, they increase in both level and strength. With every level gained, a cards ATK and DEF values increase by a certain value depending on the card itself.

The amount of experience gained from enhancing depends on the rarity and strength of the enhancer cards, as well as their element. Stronger cards will generally contribute more experience, as will cards of the same element as the one being enhanced. As cards gain levels, they will begin to require more and more experience In order to level up.

Coins are required as a price for enhancing. The exact cost depends on the level of the card being enhanced, and the number of enhancer cards. As the level of the enhanced card goes up, so does the price of each individual enhancer used thereafter.

Experiments have shown that enhancer cards with higher power requirements give slightly higher experience. Table 1 illustrates the experience differences. The percentage gains listed are for cards at level one.

It should be noted that the quality of the card being enhanced does not affect the experience gained apart from its level.

Additionally, during the process of enhancing, there is a small chance for a greater than normal amount of experience to be awarded. This phenomenon is known as "Great Success" and provides a 50% bonus to experience. During limited time promotions, the rates for this phenomenon is further increased to almost a 50% rate.

As cards gain in levels, each level requires a successively larger amount of experience values for a level up. The following table illustrates this.

The mathematical formula for enhancing experience percentage gain is calculated using the following:

For example, say a power 2 Common card is used to enhance a level five card. The percentage gained will be:

Therefore a 56% increase to experience will result.

As more complex example, say three PWR 9 Common cards and one PWR 2 Common EX cards are used to enhance a level 8 card. Assuming that "Great Success" has been achieved, the experience from the enhancing cards will be (3 x 128 + 215) x 1.5 = 898.5. Therefore, the percentage gain will be:

As base cards level up, the cost of enhancing increases. The following table shows the current enhancing costs, based on the "Half-off enhancing campaign".

If power 2 only Common cards with a power of 2 are used in enhancing, with each one giving 100 experience based on Table 1, from level one to sixty the number of cards used per level can calculated as follows:

Cost per level is essentially multiplication between Tables 1 and 3 divided by the experience per card. The following tables shows a rough estimate of the enhancing cost per level if power 2 Common cards are used all the way up. Note that here, base card level is the destination level.

The following table shows an estimate of the enhancing costs plus the evolving costs to reach from level one to the desired level, should only EX enhancer cards be used. Note that in the table, number of cards is the cumulative total number of power two cards consumed to reach the level.

Based on these estimations, the cost of creating a Perfect Max card be estimated using the following table.

Hopefully, these estimations create some guideline in budgeting enhancing before actually doing it.

A card's skill level can also be increased through enhancing. This is accomplished by using cards with skills, such as Common cards with skills or Rare (or Ultra Rare) cards, as the enhancer card. On very rare occasions, cards can have their skill leveled up, even when using enhancer cards without skills, though many estimate the odds at ~1%. Many believe that probability can be improved by sacrificing cards of the same element as your target card, but this is purely conjecture.

Due to the rarity of certain cards, it is usually impractical to use Ultra Rare or strong Rare cards as a skill enhancer. Most often, "Junk Rares" are used for this purpose. It should be noted that a cards skill level can still be enhanced even after the card has reached its maximum level.

The following formula outlines how the Skill Up chance is calculated by the game but does not work for every combination of cards.

The only parameter not taken into account is the enhancer card's skill level. This formula assumes that it is one. For a full list of your chances, see Skilling Probabilities, which takes all parameters into account.

The following table outlines the "Skill Up Chance" when enhancing a card with a skill level of one with one other skilled card of various levels. For a full listing, see Skilling Probabilities, which accounts for all skill levels.

There are players who offer enhancing services in exchange for a fee, usually in Energy Drinks, and who can enhance any card a player should desire up to its maximum level. They can also enhance a card's skill level should a player wish. The actual fee charged by Enhancers varies from person to person.

Because Enhancers often work with very rare cards, collateral is often given to clients to ensure honesty on both sides. This is especially recommended when dealing with players who's honesty is either unknown or in disrepute.