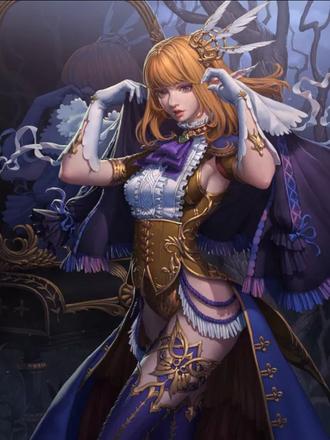 Elimval is Engset's assistant who is assigned to be the Hero's companion by Engset in the rebellion against the Elvarren Empire during the Mother Ark story.

Usually bright and cheerful, Elimval knows how to cheer up her companions when they are feeling down. She also seems to have a heart of justice, which is why she is part of The Insurgence along with her childhood friends Engset and Chalon, who she grew up with in Elvarre.

Due to Yvette being swallowed by a composite in the Royal Endgame raid event, Elimval became the game's guide character starting March 8th, 2015. Due to Yvette's fate being unknown, it is unknown if Elimval's role as the guide character is permanent.

She is shown to be rather sophisticated, often speaking to even enemies in a very polite manner.

During the 4th Anniversary Campaign (May 2016) she got her own card (Elimval, Hero's Aid). This card was rereleased:

Elimval was assigned to assist the Hero by Engset. Like with everyone, she tries to cheer up the Hero when they are feeling down. She has shown to be a good friend and companion to the Hero.

The Hero also cares for her deeply, and is shocked whenever they thought they'd killed Elimval in Fallen Justice.

Since she said "I love you" to Engset, it is possible that Elimval has romantic feelings for her. However, this could also be because they were raised together and Elimval sees Engset as a sister.

According to the lore on Elimval's card form, Engset also gave Elimval a communication device. Neotellan technology lacks the means to power it, but Engset still promised to contact her from time to time.

They have not been shown together very often, but Elimval has said she sees him as a brother.

Elimval's current relationship with Silmaria is unknown, but Elimval saw her as a friend and ally before.

Elimval and Yvette often bickered but also got along, as their upbeat personalities mixed. Elimval seemed to show sadness when Yvette was swallowed.

She says she will never be a replacement for Yvette.

Since Elimval grew up in Elvarre and is Engset's assistant, Elimval was one of Grace's servants. Their personal relationship is unknown, however.

Elimval seems to care deeply for Salvador after befriending him in the duration of the Dark Stigma story arc, and worries whenever he disappears in Dark Roars.

Retrieved from "https://legendofthecryptids.fandom.com/wiki/Elimval?oldid=298840"
Community content is available under CC-BY-SA unless otherwise noted.