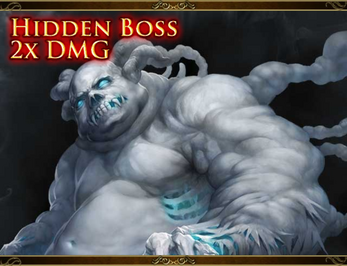 Clotted Curse Douglass is a hidden boss encountered randomly during questing in the The Lost Army raid event. Hidden bosses are only encountered after defeating the two end bosses. They are hit for double damage and the player has 2 hours to defeat them. This boss always begins with 10,000,000 hp.

Quotes: "Do I scare you? Then let me free you from that fear..."

"There is no escaping me; I can slip through any barrier."

"My body is untouchable. Surrender yourself and die in peace."

Retrieved from "https://legendofthecryptids.fandom.com/wiki/Clotted_Curse_Douglass?oldid=264030"
Community content is available under CC-BY-SA unless otherwise noted.