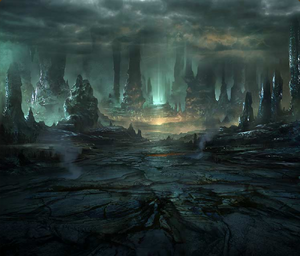 The group found themselves in unfamiliar territory after escaping Lorentz’s dimension. Their subsequent wandering led them to a rural village where they took rest. As they filled their empty stomachs in a small pub, the bartender shared a bit of gossip regarding some strange occurrences, hoping to keep them entertained enough to order another round.

“They say there’s somethin’ awful powerful livin’ in the castle nearby, a dragonmaster or what have you. The next kingdom over went chargin’ at it with their army not too long ago, but they got wiped out ‘fore sunrise. And the really odd part’s some say they seen groups of creatures headin’ fer it. Pretty much anythin’ you can imagine – humans, beasts, demon, and more – all with the same deadpan look, like somethin’ or other’s controllin’ ‘em. Everyone around here’s half on edge wonderin’ what’ll happen next.”

“Why does that seem familiar?” said Yvette, puzzled. The situation sounded very much like the tale of a man who had abducted a town’s children with merely his flute, but the Heroes were unable to remember the ending. They tried to ignore the foreboding sensations by continuing through their meal of gamey meat.

“The only thing I remember about that story is that almost none of the kids made it back,” stated Yvette, rudely seated on the table.

The Heroes knew not what lay in store for them, yet they felt it their duty to come to the aid of those that had been drawn to the castle. If the culprit was truly a master of dragons, it could mean that an untold number had already been devoured. “Whatever we decide, it can wait until morning. Any more strenuous activity and we’re likely to drop dead. Plus, the stress is bad for my skin…”

After the party had finished up their meal, the lackadaisical Yvette headed for the inn while the Heroes asked the bartender for the castle’s whereabouts.

When the Heroes awoke at dawn, they realized that the innkeeper was nowhere to be seen. Leaving their room keys on the desk, they walked out onto the street.

The group scouted out the village. Due to its small size, even a thorough search amounted to less than an hour, but not a single person was found.

The Heroes regrouped at the inn, perplexed. They wondered if it was simply a cruel joke.

“Wait. What if everyone was taken away to that castle we heard about yesterday?”

Yvette reminded them of the rumor they heard last night from the bartender. If what he described had come to pass in the village, it was rather serendipitous timing.

“I’d say there’s a good chance the townsfolk were taken to the castle sometime last night.”

The Heroes doubted they had been so exhausted as to sleep through the abduction of an entire village. The deed must have been carried out from a distance, using some kind of hypnosis or similar magic.

“This could be trouble.”

The rest of the party shared Yvette’s anxiety. They could be put under the spell at any moment, yet none were willing to leave the problem unresolved.

“I know it’s been rough these past few days, but we have to take care of this.”

The Heroes nodded in agreement, and set out for the castle.

By the time the Heroes arrived, the calamity had abated.

The man powerful enough to command dragons had been defeated by the puppeteer woman. However, it was much too late, for the woman's sister had fully succumbed to the curse. Heartbroken, the puppeteer collapsed onto her hands and knees.

Yvette opened her mouth as if to speak, but no words left her lips. Rarely did the scent of blood leave her at a loss for words. Perhaps she was overwhelmed by the hopelessness of the situation, as the Heroes were.

Though the girl was able to defeat the one who had stolen her sister, she was unable to achieve her true purpose. If that was the payment for using the crimson strings, it was far too severe.

The merchant helped the Heroes understand what had transpired. The Dragonmaster was indeed the cause of everything by abducting Niassa, the snake charmer of a circle troupe, to be his bride. Elise, Niassa's younger sister and magician in the same troupe, procured the "Threads of Subjugation" from the peddler and marched on the Dragonmaster's castle. Creatures from lowly beasts to majestic gods had been forcibly enlisted into her personal army. Yet as they could see before them, the merchant's story ended in the worst possible outcome.

"That's usually how these things turn out. It was inevitable, really," the merchant spoke with a dour look on her face.

Yvette was less than sympathetic. "Y'know, you're responsible for this, too. You sold her the Threads in the first place."

"I simply gave her the power she wanted. How she used it was up to her." The merchant pointed towards Elise, who was staring skyward in a daze. Before her stood the menacing structure of the Dragonmaster's castle, looking for all the world like a hungry beast. It would not be surprising if it lunged to swallow her whole at any moment. And behind her stood the multifarious force, awaiting her command.

"Even in battle, one does not accuse with the sword, yes?"

"If it weren't for your meddling, it wouldn't have turned out like this!"

"For a merchant, peddling isn't meddling. It's no different than a builder constructing a house, or a farmer tilling the fields, or a hero saving the world. It's how things are."

The merchant remained calm in the face of Yvette's indignation. Based on experience, the Heroes knew that words were a waste of breath on such people. It was possible that her upbringing left her with completely different values, but her words held a kernel of truth. Yet there was one clear point of contention: There was no guarantee that they could save the world, but they felt they had to make an attempt.

Even as the Heroes tried to confront her, the merchant remained aloof. It was similar to a mayor trying to give a moving speech to an uninterested child.

"We're not seeing eye-to-eye. What if I said I had to provide for a houseful of orphans? Would that satisfy you?"

Yvette retorted, "You can't justify your actions with a hypothetical situation."

The merchant turned away, as if regarding Yvette's words as nonsense. All faced the battlefield, its silence permeating the air. Nothing had changed since the conclusion, neither the two sisters, nor the puppet army, nor the piles of corpses.

The party left the merchant behind for the blood-stained ground, making their way towards the overcome Elise and the cursed Niassa. The latter was wordlessly stroking the hair of the deceased Dragonmaster. Finally, Elise, still prostrate with arms crossed as if embracing herself, shouted with a beastly rage. But then a different yell interrupted her.

At Yvette's terse command, Elise jerked up, teeth chattering in fright. It appeared as if the endless flow of tears had drained the emotion from her eyes.

It appeared that the desire to rescue her sister was all that mentally sustained her. Yet with her goal ending in failure, the gravity of the heinous acts she had performed weighed heavy upon her conscience.

Yvette continued, "Look, I wanna feel sorry for you, but there's still something you gotta take care of first." Elise shook her head in refusal.

"There could still be... another way," she chanted as she crawled toward her sister. Yet in the next instant, Niassa hissed and bared her teeth, as if protecting the body of her dead loved one. Though brought about by the advanced state of the curse, it was a profound display of affection. And in that moment, any trace of hope within Elise had vanished.

The scarlet strings from her fingertips also faded, causing a stir on the battlefield. The Heroes expected the battle to begin anew with such a large number of powerful, bewildered figures in one place. Already, quarrelsome words began to surface. If nothing was done, there would be further bloodshed.

"We better nip this in the bud before we take care of anything else, Heroes."

The group quickly moved to assuage the newly freed warriors, but not before Yvette could give Elise a glance urging her on. The last they saw of Elise, she appeared to be bowing in apology to Niassa.

Retrieved from "https://legendofthecryptids.fandom.com/wiki/Behind_the_Lines?oldid=248753"
Community content is available under CC-BY-SA unless otherwise noted.