Animated 22-PWR UR available as a Final Ranking reward for 1st and 2nd Places. 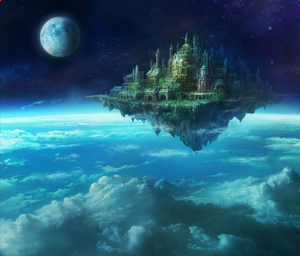 The sky moaned a baleful tone... The Star of Calamity was nearing... Disaster would soon befall Neotellus... However, many were ignorant of the looming crisis. They continued to live their lives, concerned with their own private trials or joys.

The first to become aware were the avirons who resided in the Sky Nest, a floating fort that purified aerial pestilence. Upon the sky's warning, they sensed the scourge filling the air...

Almista's frustration echoed throughout the corridors of the Sky Nest. The outrageous circumstances were enough to elicit grievances from one of her even temper. "What has happened to you, Hieronymus?"

The sage could not contain her shock at the treachery of one of her personal guard. His beautiful white wings had turned as dark as night, and the mad grin revealed he no longer possessed reason.

Almista recalled he had been the one to first report the abnormality of the air. That same abnormality was very likely the cause of his stupefying behavior.

"Does this mean that... the Sky Nest has been overwhelmed?"

Hieronymus was scarcely the only one who had fallen. Indeed, nearly her entire entourage was now seeking to end her life. If one were to succeed in doing so, then the Sky Nest would would cease to function, and the impurity would spread unchecked, blotting out the sun and inviting total chaos. To make matters worse, the enigmatic intrusion happened to coincide with the Strata Festival, a ceremony held once every ten years where humans were invited to the Sky Nest for the purpose of celebrating the sky and its blessings.

Yet on this occasion, all traces of jubilation were replaced with bloodthirsty howls. Almista looked past her depraved guardsmen to the Star of Calamity, still aglow. She was completely at a loss, for a situation so dire to be beyond the capacity of the Sky Nest had never occurred in its history. Surrounded by her servants, her mind wandered to the ominous star, presuming it to be the catalyst. Then all at once, their blades pierced her skin.

"It seems like we ruin any party we show up to."

Yvette and the Heroes sighed as the people rioted. They had also been invited to the Sky Nest for the customary Strata Festival, yet shortly after their arrival, they learned catastrophe demanded its premature end. The desperate aviron evacuated as many humans as they could to the ground. It was apparent that lives were at risk, yet the hosts seemed apprehensive to share any details regarding the circumstances.

"You must depart; this does not involve your kind," said an aviron of striking beauty, bowing deeply to the Heroes.

"We became involved the moment we set foot in this place!"

Yvette was clearly unsatisfied. Troubled, the aviron looked over the party and, relentingly, divulged the particulars.

"The Strata Festival is being terminated due to a mass mutiny amongst the aviron population, in addition to the disappearance of our sage."

"I thought a so-called 'sage' would be more heavily protected," Yvette growled, arms crossed in consternation.

"Well, the fact of the matter is the guards also joined the mutiny," replied the woman, crestfallen. The Heroes were unsure if she was distraught, or loath to imagine the disgrace the avirons would bear in the face of the scandalous events.

"Now that I have addressed your concerns, please leave at once. I must see to the sage's security posthaste."

By now, most of the humans had been escorted away by the avirons. The warm commotion of the festival had been swept away by the chilly winds blowing through the Sky Nest.

"Cease with your impertinence. No matter how strong you may claim to be, landwalkers are of no aid to us."

The fairy found herself unable to argue. It was true that without the ability of flight, the Heroes could not help with the search, much less in routing the foes. However, they felt it was improper to leave without offering some sort of assistance. As they gazed at the Star of Calamity, pondering their options, a blur of black suddenly flew by. On instinct, the Heroes grabbed Yvette and the woman and dropped to the floor, the slicing sound of steel ripping through the air.

The Heroes jumped back to their feet, but were shocked at the sight that greeted them. Throngs of corrupted avirons filled the sky, their darkened wings flapping ominously. Before the party could take further action, the sinister beings dispersed in all directions.

"Curses, I must pursue them!"

One Hero took the winged woman by the shoulders and shook their head. While they had no responsibility in the matter, they knew that a lone aviron would be unable to overcome her entire tribe.

"Who did you mention you were again?"

The woman appeared to come to the same conclusion. After Yvette introduced themselves, so did the solitary warrior.

"My name is Maune. Come, follow me. I believe I know how to impart flight upon you temporarily."

Retrieved from "https://legendofthecryptids.fandom.com/wiki/Azurian_Realms?oldid=258754"
Community content is available under CC-BY-SA unless otherwise noted.