At one point, a nefarious soul appeared before the king. Though in truth he only wished to explore the now dilapidated castle, Fennel saw the trespasser as committing the gravest of slights against her lord and needing to be eliminated at once. With a slash of her azure scythe, his head rolled and blood gushed into the air. "Be at ease, my Lord. I have repelled the intruder," she said, returning to the bleached bones. Fennel pledged to remain by his side, spending an eternity in that state of deplorable delusion.

Fennel is a variant form of an English, Irish, and Scottish feminine name Fennella of Celtic origin. Anglicized form of the Irish name Fionnuala, means "white shoulder" derived from Irish fionn "white, fair" and guala "shoulder". In addition, Fenell is a variation of English, Gaelic, German, and Scottish Fiona.

Also fennel is a hardy, perennial herb with yellow flowers and feathery leaves. It is a highly aromatic and flavorful herb with culinary and medicinal uses. The word "fennel" developed from the Middle English fenel or fenyl. This came from the Old English fenol or finol, which in turn came from the Latin feniculum or foeniculum, the diminutive of fenum or faenum, meaning "hay". 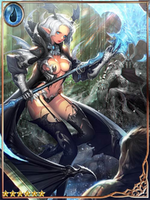 Retrieved from "https://legendofthecryptids.fandom.com/wiki/(Blissful)_Fennel,_Eternal_Guard?oldid=281855"
Community content is available under CC-BY-SA unless otherwise noted.